Sergt. Wittenweiler’s Death, Touched Upon in Letters From Comrades, Confirmed by Washington

Official notice of the death of Sergeant Frank G. Wittenweiler, of Ozone Avenue, Verona, has been received by the Sergeant’s family in the form of a telegram from Adjutant General Harris, Washington, D.C., to the Sergeant’s mother. The message announces that Sergeant Wittenweiler was killed in action on October 12th. His is the first known death among those who went overseas from Verona.

Sergeant Wittenweiler was born in Verona on October 21, 1896, and was, therefore, not quite 22 years of age at the time of his death. He attended the Verona Public School and the Verona Presbyterian Sunday School. He left school on completing the grammar course and entered the employ of Turner Brothers, sheet metal workers, of Newark, remaining with that firm until the National Guard was called to service on the Mexican border, when he enlisted in Company K, of Montclair, leaving Sea Girt for the West in
July, 1915. In service on the border he was advanced to the grade of Corporal.

When Company K returned and was mustered out of the Federal service, Wittenweiler resumed his former employment, but was soon called to the colors again, when America entered the World War. After doing guard duty for some time at Bound Brook, Pompton, Haskell and other points, his company was sent to Camp McClellan, Anniston, Ala., in September, 1916, where he remained until June, 1918, advancing to the office of Sergeant.

From Camp McClellan the company was moved to Camp Stuart, and after a brief stay there was embarked for France. From Camp Stuart, dated June 12, 1918, he wrote his brother Henry the following letter, which proved, as he predicted, his last from this side: Dear Hen:–Received your welcome letter, and certainly was glad to hearfrom you. It has been some time since I wrote you last, but I was gettingdifferent things for my platoon. I was up for the last two nights, becauseit had to be done. We were only here about six days, and we will leave here in a few more for the other side.

We left Camp McClellan on Thursday afternoon and got here Saturday afternoon.There certainly was a happy bunch of fellows when we pulled from Anniston, butwe all thought that Jersey was our stop. That’s why I wrote home and told them I could get home. I can’t get a furlough or leave of any kind from here, because we will pull from here in a few more days. Perhaps I will be leaving when you get this letter. I certainly was disappointed when I found out where I was bound for. The officers were not allowed to tell the men.

Well, Hen, I will close, for I have more to write to-night. This might be the
last letter you receive from me in the U.S.A.

Ted, as Sergeant Wittenweiler was known to his intimates, was a big, athletic fellow. proficient in his military work, and expert in bayonet practice.

“No Hun within reach of his bayonet ever got him,” says Henry with proud conviction. “It must have been a shell.”

He played shortstop on the ball team of the Junior Order U.A.M., of which he was a very popular member, and also played on the Camp McClellan team.

Many friends share grief of his family, whose surviving members are the father and mother, Henry J. and Elizabeth Wittenweiler, two brothers, Henry Jr., and William A., and his sister Frieda A.

Reports of the death of Sergeant Wittenweiler had preceded the telegram through letters from others to their own home folks, but of so meager a nature as to leave hope surviving. Two of his compatriots mentioning him in their letters, but assuming that the folks at home already had the news, omitted to state it in such terms as would have dissolved the doubts.

Sergeant Harold D. Rowland, of Claremont Avenue, Verona, writing to his father under date of October 23, 1918 says: “suppose you have seen in the papers what our division has done, and also about poor Wittenweiler. It sure is hard to forget him, and his mother, I’m afraid, will never get over it.”

Sergeant John W. Dreis, in a letter to his mother, dated November 4, 1918, says, more definitely: “Poor Ted was killed. I suppose you have heard of it already. I could write a book on the battle which occurred at 7 o’clock on the 12th day of October, 1918. I suppose you have read of the battles north of Verdun and west of the Meuse River, in the Argonne Forest. Well, thats where we fought. That is the gateway in to Metz, the iron center for Germany, and they have their best and most of their soldiers there.”
The Caldwell Progress  Saturday, December 14, 1918 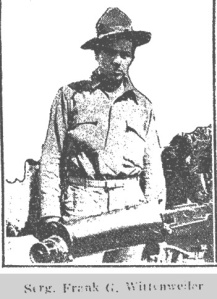 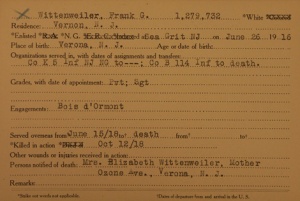 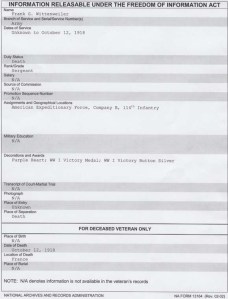