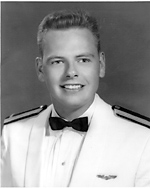 Eugene M. Pabst, “Gene”, was born to Marion and Fred Pabst of Pompton Lakes, NJ on October 13, 1942 in Verona, NJ.  His father, Fred was a New Jersey State Trooper.  His mother, Marion Gaffney Pabst was a homemaker.  Gene was their only child.

Gene graduated from St. Brendan’s Grammar School in June 1956.  He then went to Fordham Preparatory School where he became involved in track and cross-country for four years, serving as Outdoor Captain for two.  During this time the team established themselves as “the one to beat”, bringing home trophy after trophy, topping it with the
Catholic High School Athletic Association award for two years straight.

In September 1960, Gene entered Fordham University and the Air Force ROTC program.  During his four years at Fordham, he continued to show and improve his abilities both in track and in the classroom.  Gene also ranked at the top of his Air Force ROTC class and was a member of the Arnold Air Society.  He was a cadet non-commissioned officer in
charge of the Air Force Drill Team and was a member of the rifle team as well.  He served as class Vice President in his junior year.  In June 1964, he graduated from Fordham with a degree in economics and a commission as a 2nd Lieutenant in the US Air Force.  Pabst
received the Thomas Paradine Award, the coveted Silver Saber, for the Most Outstanding Air Science Student for 1963-1964 at Fordham University.

Pabst received and completed his pilot training at Laughlin Air Force Base in Del Rio, TX.  He was assigned to the 497th Tactical Fighter Squadron at McDill Air Force Base in Florida.  He was then ordered to go to North Vietnam on July 15, 1966.  He attained the
rank of Major (MAJ).

Pabst was listed as missing in action on October 7, 1966 when his aircraft went down. He was later presumed dead in 1973.

Synopsis (from the POW Network) as to the circumstances behind being listed as MIA:

Pabst was the co-pilot of an F-4C aircraft on a nighttime strike mission on October 7th, 1966 when his aircraft failed to recover from its dive during an attack.  The wingman seeing a fireball and a fan shaped oil fire.  An aircraft, number two in a flight of two, had successfully completed a rocket pass when number one observed a bright flash in
the water.  No parachutes were seen and no beepers heard.  No evidence of the plane nor Pabst was ever found.  Since his remains have not been recovered and returned, he is listed by the Department of Defense as unaccounted for in Southeast Asia.

Photo and text courtesy of the New Jersey Vietnam Veterans